You are here: Home / Hamster Care / Chew-proof Dwarf Hamster Bottle Stand and Hideout
Some hamsters like to chew stuff up and a lot of people find their plastic accessories don’t last long when their pet hamster keeps using them as chew toys. If you use a plastic bottle stand or a water bottle that’s placed directly in the cage, you might have to replace them often because they’re so easily damaged by your pet.

A while ago, Flaxseed the winter white hamster started chewing at her water bottle stand. We had plenty of chew toys for her but she seemed to prefer the bottle stand and bottle over her regular chew-toys. Look at the huge hole she made! 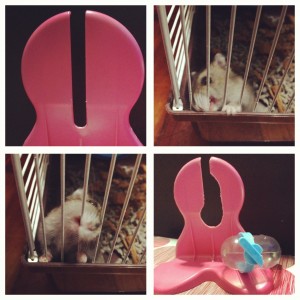 Flaxseed had to go back to her old cage because she chewed up her bottle stand. She’s now back in the DIY bin cage with her new chew-proof bottle stand!

We got her more attractive chew toys and hamster-safe dog treats, but she didn’t stop chewing on the stand. In the end, we found a ceramic bottle stand that’s not just chew-proof, but also protects the bottle from getting chewed on. There’s also space inside the stand and an entrance so the hamsters can use it as a hideout.  Below is a photo of Flaxseed and Oatmeal with their ceramic bottle stand/hideout. 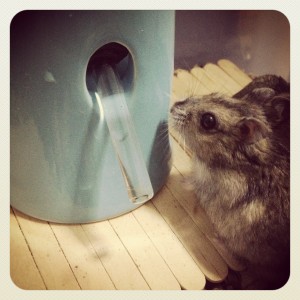 boo_the_hamster requested photos that show the whole bottle stand, but we thought a video might be clearer. The video’s a little shaky but you can see the entire ceramic stand, the area where we put the bottle in, and the ‘hideout’. Also the stand/hideout is a good size for dwarf hamsters but probably too small for a Syrian hamster.

Where to buy a ceramic bottle stand

The above bottle stand is now available on Amazon in Yellow 😀

We got the above bottle stand from China and it’s also available on Aliexpress which is a China-based shopping site.

Amazon US sells a different (and cheaper) ceramic bottle stand for hamsters (photo below) but it doesn’t come with a hideout. 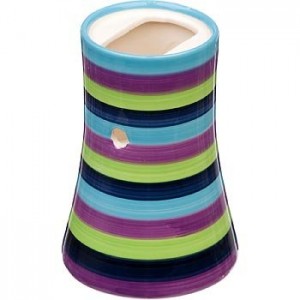