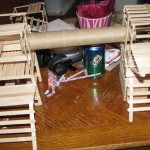 This article is submitted by a reader. If you wish to submit your writing to our blog, please check out this page

Here are some entry-level ideas, best done at the end of summer, when you have a supply of ice-cream sticks generously donated by yourself or your family! Of course, they can be bought en masse at any craft store, but that’s not nearly as delicious. What you can build is only really limited by your imagination, so go nuts! 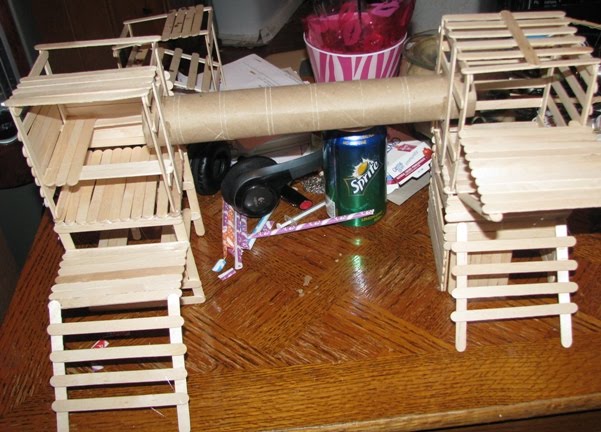 It almost looks like a wrestling ring for rodents, but this is a platform fit for a hamster king or queen. All it needs is some spare popsicle sticks from #7, and you could make a little Iron Throne. 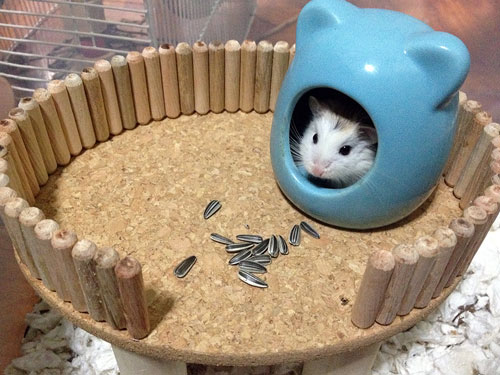 This is for the hamster of discerning tastes, who values luxury and privacy while bathing. Throw a couple of rocks and a tiny rake in it for a multitasking Zen garden! 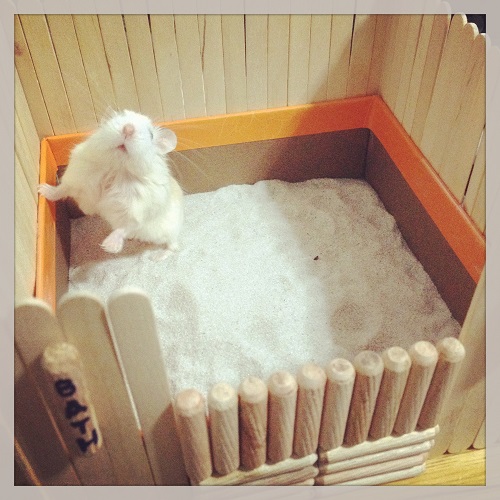 http://dwarfhamsterblog.com/diy-hamster-bath-house/
(Props to the Dwarf Hamster Blog for making the list twice!)

From here on out is utter madness. Let’s ease into it by watching a hamster learning to use a home-made elevator.

You’re looking at a spacious bit of converted IKEA furniture from a site called IKEA Hackers. It resembles a fish tank but is actually the final form of a shelving unit. The remaining shelves are to be used for filing, and honestly, I’m a little disappointed that there isn’t a hamster-sized work cubicle, as this all sits in someone’s study! 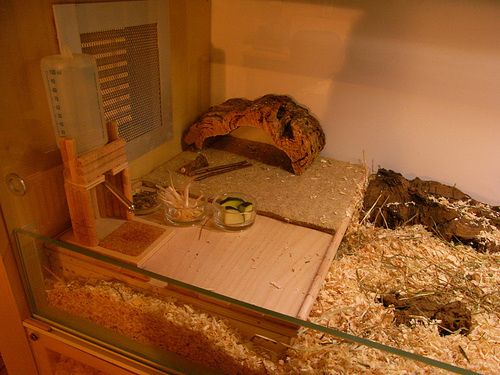 At one point, it was widely known that the internet is run by a series of tubes. Self-confessed Apple fan boy, nicknamed Sunder, has taken this to its logical extreme and put his hamster inside an iMac monitor, with food accessed by a series of tubes. This group of pictures really says it all, but Sunder also provides a detailed guide to doing this DIY project yourself! 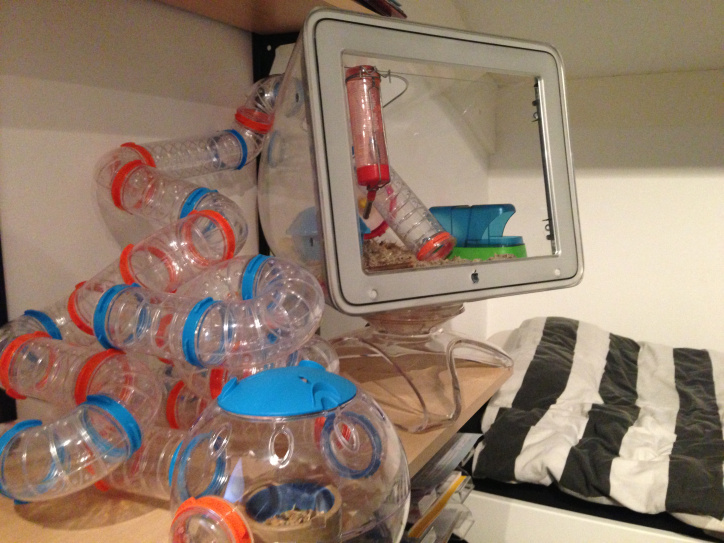 The builder/inventor/apparent madman, Chris Todd, stated that this monstrosity took 11 months to construct and almost resulted in divorce. No word yet on what could have caused the marriage strain, though I suspect it was too much wheeling and dealing on Todd’s part. 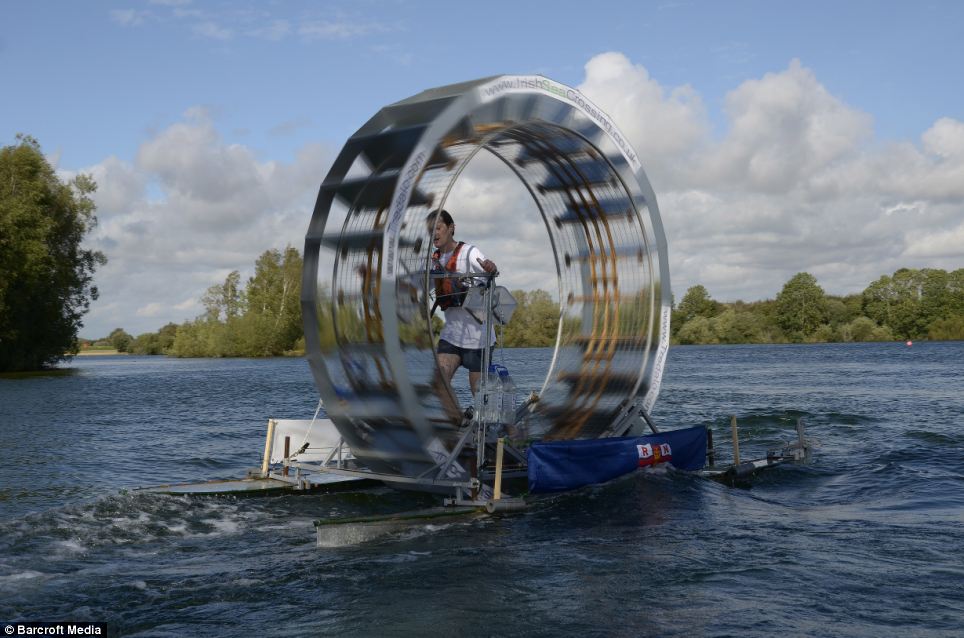 James has two rodent pets, George the hamster and Mildred the rabbit. He enjoys seeing them play together and when he’s not busy tending them he works as electrical instructor at Ableskills.co.uk . 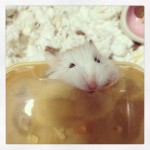 Dwarf hamsters should never be bathed in water but they do enjoy rolling in bath sand. Mine are always kicking the sand out of their bath tub. Also, my original hamster bath tub was tiny, made from plastic, and as you can see from the photo, it gets chewed on! I could get a chew-proof ceramic bath, but I had plenty of material leftover from my last DIY hamster platform project so I decided to build one. 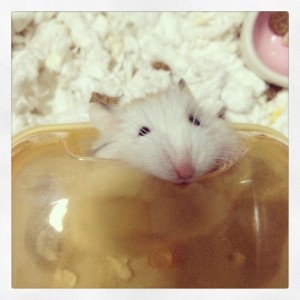 This hamster bath house / giant bath tub was made with leftover wood dowels, popsicle sticks, and part of an old gift box. Since it’s mostly wood and cardboard, it’s not so bad if the hamster chews on it. Plus it’s much bigger and a hamster would have to kick the sand pretty high to get them out. It’s easy to build, requires few materials and took me only twenty minutes at most.

IMPORTANT NOTE: Some readers have reported hamsters getting their legs stuck between the popsicle stick wall. To prevent this from happening, please build the bath house with sticks placed horizontally (unlike the photo above which shows the sticks placed in a vertical position)

That’s it! If you wanted to, you could probably add a roof or even convert this into a hamster house.

If you’ve enjoyed the tutorial, please help us spread the word by sharing this with your friends. And if you have any comments or questions, feel free to leave a message below. Thank you! 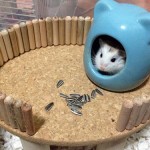 I wanted to make a platform for my dwarf hamsters because the one that came with their cage was kind of ugly. After looking at Nikkigrace’s Ikea Knuff hamster platform on Hamster Central, I was inspired to make my own DIY hamster platform.

This platform is suitable for dwarf hamsters. There’s enough space for a hamster (or two) to go on it as well as sleep under it. My dwarf hamsters seem to like sleeping under the platform during the day. Scroll down for detailed instructions to make this platform ^_^

Time taken to build this hamster platform: About 30 minutes (not including time taken for glue to dry)

Here are the materials I used and instructions to make them. Note: I didn’t make any stairs because I forgot! Luckily, my dwarf hamsters were able to climb up the platform on their own. You could probably make stairs with popsicle sticks or paper tubes if you wanted to. You could also use these bendable fiddlesticks as makeshift stairs. 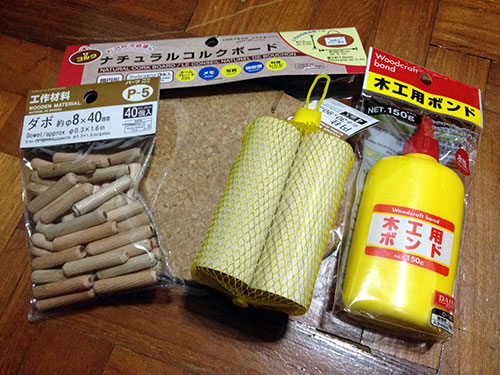 You should be able to find these materials easily in a hardware store. Amazon also carries wood dowels but I think they’re kind of pricey. If you’re in Singapore, I got all of these items from Daiso Sembawang — the corkboard is in the Stationery section and the rest are from the Crafts section.

If you prefer not to make your own, there are plenty of hamster platforms available for purchase as well. A good one would be the Super Pet Woodland Getaway which is a platform and a house in one. For under 10 bucks, you can get a medium-sized platform/house that has enough space for a hamster or two to nest in and climb on. Larger sizes are also available but they might be a little too big for a dwarf hamster to climb onto. This is made from wood that is safe for animals (our DIY platform is too!) so there’s no issue if your hamsters chew on it.

Any questions or comments? Leave a message below. If you’ve found this helpful, please help us out and share it with your friends! ^_^